I am now undeniably in my late thirties. I have been joking that I’m “almost 40” since the moment I turned 31. That doesn’t seem like a joke now.

Your life is your habits, and before buying the Volvo I did not have a habit of driving one car for long. I wrecked a Mazda Protegé after barely two years. A Honda Civic was stolen from a parking lot while I watched Pirates of the Carribean. I replaced that with a Miata that I replaced with a Subaru that I replaced with another Miata.

I loved those cars. Or I think I did? Although I can’t say that they made me happier or fulfilled, exactly, they were fun. While I wouldn’t call the C30 fun, I still like it.

I swapped the Miata for a Volvo when I swapped the single life for a shared life, a life with my wife and a puppy. I was ready to let more in, to grow; my two-seat roadster could not.

I have never wanted to trade back.

The C30 is a little worn around the edges. The driver’s seat has a sizable coffee stain. The dog has shredded parts of the back seat. The driver’s side floor mat has a hole where my foot has been resting for 100,000 miles. One of the battery terminals is corroded, but that’s replaceable. It’s on its third set of tires, second set of brakes, second A/C compressor.

I, too, am a little worn around the edges. Fifteen years ago I was able to finish a marathon (not recommended) and since then I have gained 25 pounds (also not recommended) and can barely run a half mile now. My shoulders creak when I rotate them; I’m not sure they’re replaceable. I am on my second “10 year” hoodie, 10 years sounding like a lifetime when I bought it. 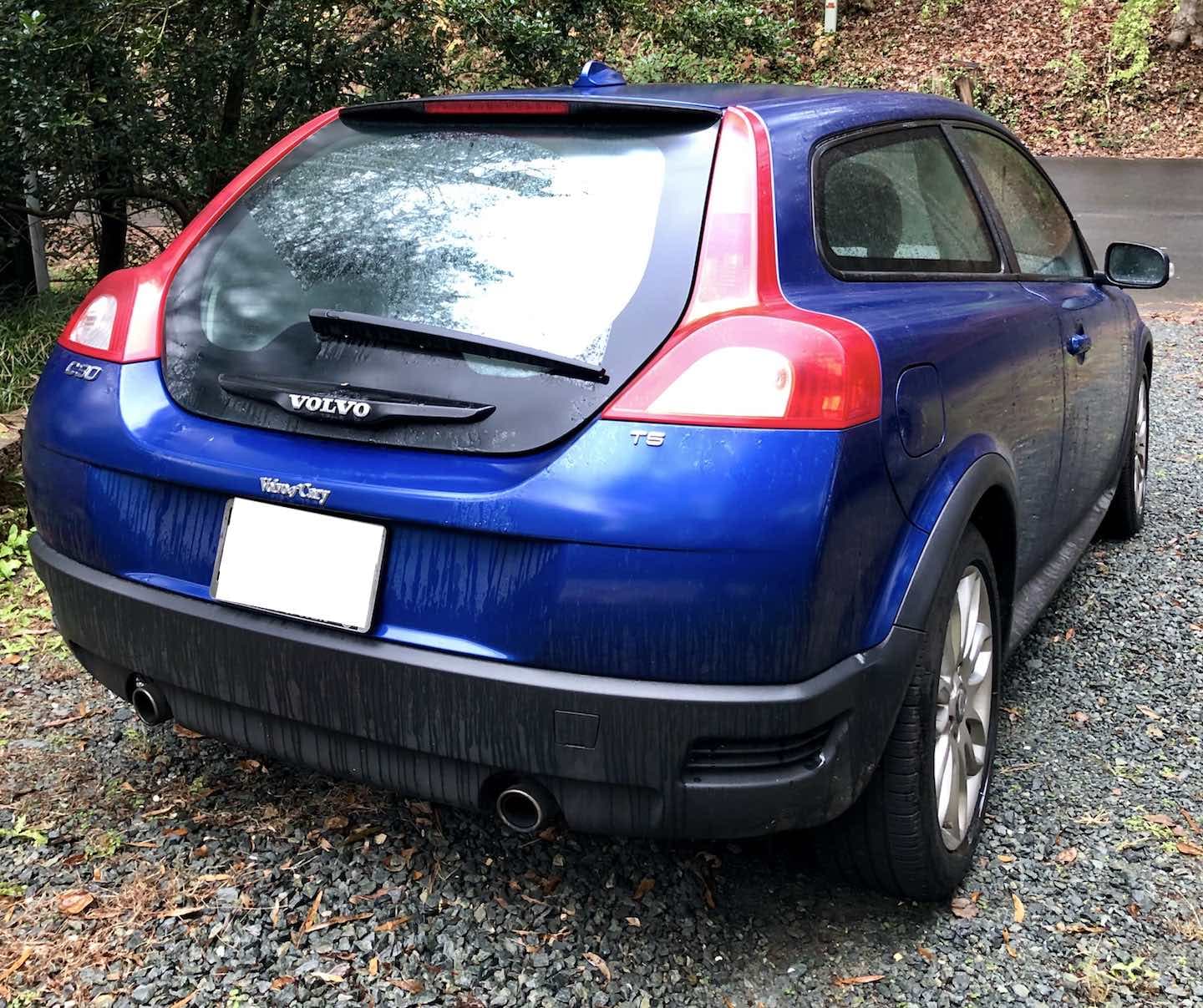 Although it doesn’t have an attention-grabbing design, it has a timelessness (aka boringness) to it. The best angle is from the back; this car has a rear end to die for. The less said about my rear end, the better.

The exterior is scratched up. When I was three years old a neighbor kid whacked me over the head with one of those wooden ducks on a stick—I am telling you this partly because that is a fun sentence to write—and I required three stitches. I finally can’t see the scar. More recent burns and scratches heal slower and slower while time in all other aspects seems to go by faster and faster.

I shave my head to avoid knowing precisely how thoroughly I have gone bald (yay, genetics); ignorance is bliss. Also I think I have a pretty nice-shaped head (yay, genetics). Having a nice-shaped head is the sort of thing that adults say to you when you’re younger and you roll your eyes and wonder what synapses fired in their minds that compelled them to say that and you definitely don’t thank them for saying that but now you look in the mirror and think “you know, it is a pretty nice shape” and you wonder how many other complements you’ve brushed off and you are filled with regret.

The seats are the bomb. I better understand the value of having a comfortable place to sit.

I’ve never used the CD player. The radio has been permanently welded to NPR for several years. This will probably be the last car I own that does not some sort of integrated touchscreen and voice control and bluetooth and autopilot. I plug my phone into a headphone jack like a farmer.

A year or so ago on a chilly night in Indiana I spent several minutes yelling variations of "sync iphone!" into the space-age, stubborn, voice-controlled console of a newer rental Mitsubishi. I could not “sync iPhone.” I yearned for a manual, like a farmer.

The doors are heavy and huge and nearly always nearly banging into things. I don’t think I’ll get a two-door car again. Live and learn.

I get a little smarter every day. Younger me was and will forever be a dumbass. I’m glad he’s gone now.

The other day I was shopping for presents at a toy store and, upon seeing a toy crossbow, I remarked to my wife that it looked as though it could “take someone’s eye out,” thus revealing to all within earshot that I was in fact over two thousand years old, taking advantage of Small Business Saturday while on a break from guarding the Holy Grail.

The fuel economy is fine, but could be better. The Volvo prefers premium high-octane unleaded, but I often cheat and put in regular. I eat more vegetables these days, but I sometimes cheat and put in Taco Bell. I’m trying to read more books, but I still read plenty of random internet trash (👋).

The Volvo C30 is not the fastest car, but it’s fast enough. I’m not the cleverest, but I’m quick enough. It doesn’t have an abundance of cargo space, but it holds enough. I don’t have all the answers, but I know enough to listen to others. At least, I try to.

I/it need/s more maintenance than I/it used to, but I feel like I know myself/it better.