When you share a link to this site on social media, the preview image is a literal preview of the URL, generated on-demand. It’s super cool, and I’ll walk you through how it works.

I didn’t end up loving the social media images that were just screen captures; I’ve switched to a solution for this that scrapes any given page and feeds some data into a template.

I’ve replaced the formerly dynamic images with static versions that were accurate as of the time of the article’s publication.

Also, fair warning: I don’t think the function code will work exactly with puppeteer v10+; it did work with version 8. Here’s a gist with the builder code that worked with v10.

As an example, here’s an on-demand preview image of my home page: 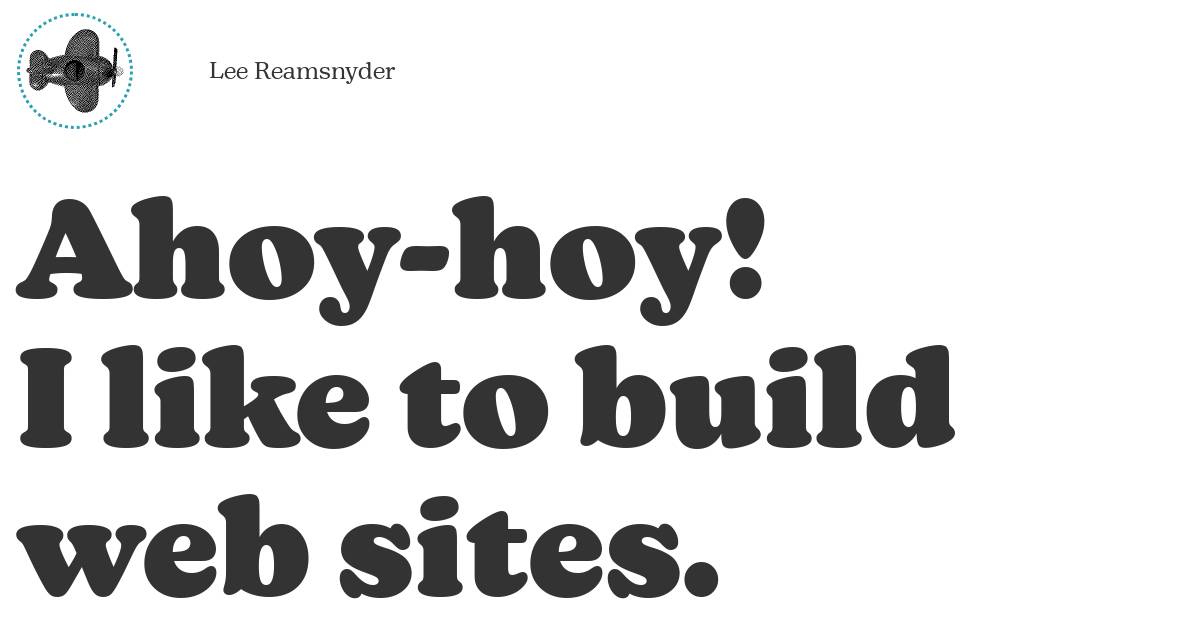 Having an image show up when someone shares your site on social media is a big deal. As Chris Coyier of CSS Tricks says:

they turn a regular post with a little ol’ link in it into a post with a big honkin’ attention grabbin’ image on it, with a massive clickable area. Of any image on a website, the social media image might be the #1 most viewed, most remembered, most network-requested image on the site.

While I suppose the ideal would be for every page on my site to have a bespoke image with irresistible clickbait content (“Doctors hate this one weird trick to make social media images”), I have nearly 600 pages here and I don’t have that kind of time.

Instead, I figured my social media images could be an actual preview of the link you’re about to tap, the sort of corner-cutting that looks like clever thinking that truly identifies me as a programmer.

At first I tried generating a bunch of images as part of my build process, but scraping and screenshotting 600 pages took forever, so I dropped that.

What I really wanted was something I could invoke on-demand. Thankfully, I’m on Netlify, and they have the tooling to make that possible!

I’ll go through those in more detail, including how I make sure they function all correctly when developing locally, which is always the frustrating part.

You need a handful of meta tags that I’m not going to go over in detail, but for the preview image the important one is this:

The content must be a complete URL (not a relative path).

Here’s the breakdown of the path:

I use SvelteKit to build this site, so here’s the code I use to get the current page path and generate the meta tag:

In my opinion, there’s not much reason for this markup to change between local development or branch deploys or production because it’ll only get truly used in production, so I have the URL for my public site hard-coded here. Nothing will be scraping your site running locally, and if I have to test it locally I can change the host.

This is a one-line addition to my _redirects file:

So now on Netlify, anything accessing /og-image-generator/-whatever is going to hit my Netlify on-demand builder.

Setting up the Netlify on-demand builder

Next up, we’ll add our function file at netlify/functions/og-image-generator.js.

Once netlify builds and deploys everything (or you run netlify dev locally), that’ll be available at ${your URL}/.netlify/functions/og-image-generator.

If you’re not using ES Modules in your codebase, you can skip this bit.

If your project is using Node ES Modules (SvelteKit projects do; there’s "type": "module" in the root package.json), you need to add a tiny package.json file in that netlify folder:

You need this because Netlify’s tooling doesn’t work with the new-fangled ES Modules (import/export); they use the original Node CommonJS module format (require()/module.exports).

In Node world, a file can’t use both module formats. In an ES Modules project, if you use require() and friends in a .js file, Node will error out as it assumes .js files will be using ES Module syntax. You can use CommonJS module syntax in files with a .cjs extension, but Netlify requires function files to be .js files and doesn’t know what to do with .cjs files at all, it seems, because life is an unceasing struggle.

Our little netlify/package.json file is telling Node, “Hey, everything in this folder on down is gonna use CommonJS and it’s fine. Kindly don’t freak out about it.” Now you’ll be able to run functions locally with netlify dev.

All right, let’s add some dependencies:

You might be asking why we’re installing two versions of puppeteer but trust me. I know things.

Next up, here’s my entire function file at netlify/functions/og-image-generator.js (we’ll go through it bit-by-bit below):

The above code worked with puppeteer version 8, but stopped working for me when I updated puppeteer and chrome-aws-lambda to version 10.

This gist has the function code that eventually worked for me with version 10.

Let’s break that down.

That’s the skeleton of an on-demand builder, which we’re using instead of a regular Netlify function for a few reasons:

(Huge props to Ire Aderinokun for this bit.)

So, regular puppeteer is too large to run on Netlify functions, which have to be under 50mb total once they’re bundled up. The chrome-aws-lamdba is a lightweight version of Chrome that along with puppeteer-core can eek under that limit. More on that soon.

These are some constants I pulled out that we’ll use later. Right now something in the ballpark of 1200x630 is ideal for Facebook and Twitter image previews. The clipY lets me define how much I scroll down the page before taking the screen capture.

Let’s dive into our handler function:

Because I’m using Netlify’s rewrites, when you request something like /og-image-generator/blog/og-image.jpg Netlify sends that to /.netlify/functions/og-image-generator but puts the original request path on event.path in your handler function. If I replace the first and last segments with empty strings, what’s left is the path of the page that I want to take a picture of, like /blog.

Netlify functions can use the URL build variable (the public, production URL for your site), so I’m using that here. When you use netlify dev to test locally, that’ll be the URL of your local server (typically http://localhost:8888), so you can test this locally without hitting your live site. When I put those together, I have a full URL to give to puppeteer.

So let’s spin that up:

Because we have to deal with some strict size limits, this looks a little different than a typical puppeteer.launch().

chromium.puppeteer is a helper that will look for a local puppeteer library, which you’ll probably have developing locally. However, when deployed on AWS (Netlify functions are a handy wrapper around AWS Lambda functions), chrome-aws-lamda lists puppeteer-core as a peer dependency (and we installed it as a production dependency) and will use puppeteer-core instead. You can read their docs but they’re a bit sparse; I thought Ire Aderinokun’s explanation was much clearer.

This was the secret to working locally for me. With netlify dev, chromium will wrongly detect that you’re running on AWS (the AWS_LAMBDA_FUNCTION_NAME environment variable is set), so chromium.executablePath will be to the special linux AWS Chrome, which is what you want on AWS, but it won’t work locally.

So I check the URL environment variable for localhost and use null for the executablePath if we are running locally with netlify dev. In that case, you’ll use your local Chrome/puppeteer and be in business for testing locally.

This uses those size constants from earlier to set the browser size large enough for my screen capture.

The rest of the launch arguments set some useful defaults for running on AWS that don’t seem to make much difference for my purposes when running locally.

Now that we have a browser that’ll work locally and on Netlify, we fire up a new page and navigate to the url that we figured earlier.

Screenshot time! Netlify functions have to return strings instead of binary data, but base64 encoding lets us get around that and we can do that right here.

The clip lets me chop off the top 60-odd pixels, effectively like I scrolled down the page a bit.

Now that we have the screenshot data as a big data string, we return that (note isBase64Encoded: true) and, boom, we’ve served up an image.

You can give one a shot here: https://www.leereamsnyder.com/og-image-generator/blog/the-medium-place/og-image.jpg, which comes from this post.

Here’s how that looks in Facebook’s debugger: So this is pretty new to me, but there are a couple of gotchas I’ve seen already:

All of those are overshadowed by the overwhelming neatness of the whole process working.

If your mind gears have been turning on something like this for a while like mine were, I hope this helped.